Argyle, since 1830 by Missy Schenck 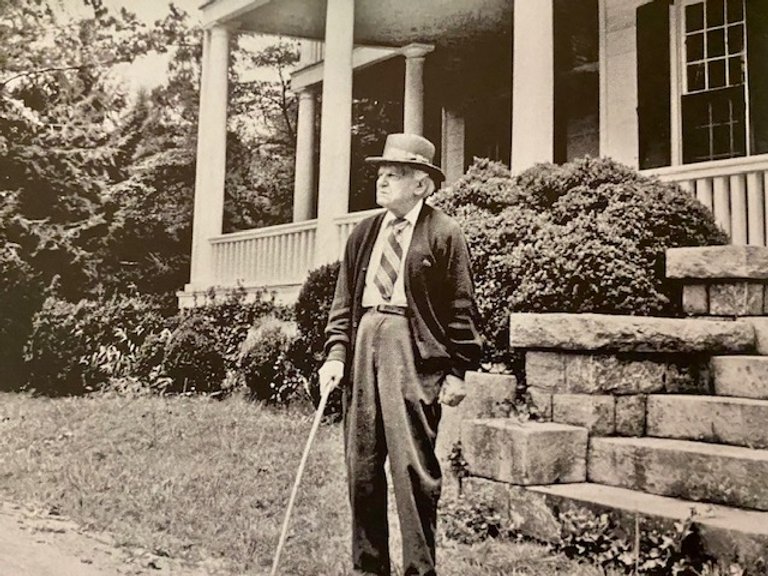 Seventh in a series on Flat Rock by the Charleston Mercury

Recently, my husband, Sandy, and I had the most delightful visit with Alexander Campbell King III, owner of Argyle in Flat Rock, North Carolina. It was Mr. King’s 91st birthday, so we celebrated in social distancing style — on his front porch. He related wonderful stories of growing up at Argyle, a family home with the distinction of having the longest continuous possession in the same family of any place in Flat Rock, perhaps in all of Western North Carolina. His people have owned it since 1830. The house felt alive with history. I could almost hear it humming as Mr. King told tales of family picnics, fishing at the dam and swinging on the porch with his grandmother. We all got very emotional and even shed tears. It was truly a memorable occasion.

Judge Mitchell King, Alex King’s ancestor, was one of the earliest settlers of Flat Rock. Born in Crail, Fifeshire, Scotland on June 8, 1783, King (originally Kingo) left Scotland in 1804 bound for Malta hoping to enter the mercantile life. The English vessel on which he traveled was captured by Spanish pirates and Mr. King was taken as a prisoner to Malaga, where he stayed for several months. Finally, in September 1805, he succeeded in escaping and sailed on a ship headed for Charleston, South Carolina.

Upon his arrival in Charleston, King immediately sought employment and his scholarly achievements provided well for him. He was able to start a small private school and within six months was offered a teaching position at The College of Charleston. While at the C of C he pursued the study of law and in 1810 he was admitted to the bar in South Carolina. He proceeded to become one of the wealthiest and most prominent citizens of the state. The father of 18 children, 11 of whom lived to adulthood, King is buried in First Scots Presbyterian graveyard in Charleston along with his two successive wives — the Campbell sisters, Susanna Campbell King and Margaret Campbell King.

King first traveled to Western North Carolina in 1828 with an interest in linking a railroad from the seaport of Charleston to the West. Shortly afterwards, King and his wife visited Asheville, N.C. hoping to find relief for his wife’s asthma. On their way home, they stopped to spend the night in Flat Rock and for the first time in months, his wife immediately found comfort. It was then King decided to make Flat Rock his summer home and proceeded to buy acreage until he and Charles Baring owned all the land in Flat Rock. Eventually King’s holdings amounted to 7,852 acres including property adjacent to Flat Rock. In 1838, with a gift of 50 acres, he was instrumental in the creation of Henderson County and the establishment of Hendersonville as the county seat.

In 1830, Judge King bought the property known as Argyle from Colonel John Davis. Once called the “Saw Mill Tract,” it was originally part of a Revolutionary land grant to Abraham Kuykendall and D. Miller. In addition to the 1,390 acres, the land included a dwelling house, saw mill, furniture factory and various other buildings. The original house, a two-on-two with a central staircase, remains the core of Argyle today. This portion of the house, built around 1815, makes Argyle the oldest dwelling in Flat Rock and one of the first two houses in the Flat Rock settlement, “The Little Charleston of the Mountains.” King named his summer home Argyle, after his wife’s ancestral county in Scotland.

Judge King enlarged the mill house dwelling with two story matching wings and arched latticework across the entire front porch. A kitchen house and other small buildings were built or upgraded and a book cottage was created to house King’s extensive collection. Trees harvested from the land were sawed into planks at the lumber mill on the property and 80,000 bricks were made locally for the chimneys and 12 fireplaces. Granite was quarried nearby and used for the foundation and stairs.

When Judge King died, he left Argyle to his two unmarried daughters. One married soon after his death, leaving sole ownership of Argyle to his daughter, Susan. Upon her death in 1910, Argyle was to be sold on the courthouse steps. Judge King’s grandson, Alexander Campbell King, solicitor general of the United States under Woodrow Wilson and later associate judge of the Fifth Court of Appeals, made sure his bid was the highest and Argyle remained in the family.

The most significant renovations to Argyle were made under the ownership of Alexander King. He hired Richard Sharp Smith, supervising architect for the Biltmore House, to help with these plans. The lattice across the front porch was removed and replaced with wooden columns. Indoor plumbing, bathrooms and electricity were added. The kitchen once housed in a separate building was a new addition to the main dwelling as well as the grand staircase in the front hall. The old kitchen house was converted to servants’ quarters and the book cottage was renovated to include two bedrooms and a small kitchen for year round use. The house, once designed for comfort, had a newly acquired colonial elegance.

Alexander King died in July 1926 at Argyle. His wife, Alice May Fowler King, continued to gather her children and grandchildren every summer and to carry on the summer traditions embedded in Argyle’s history. Eventually, she remained at Argyle in the book cottage with the care of a registered nurse, Miss Olive Braswell, until her death in 1955 at the age of 97.

Alex King III is part of the fifth generation of Kings to grow up spending summers at Argyle. His grandmother’s chauffeur, Albert, would drive them up to Flat Rock from Atlanta, Georgia in her “Twin Six” 12-cylinder Packard and the children would sit on the jumper seats in the back of the car. It was always quite an adventure including tales of speeding tickets and picnics on the way. Spinola, the chief cook, came along with them to man the kitchen in Flat Rock — a spot off limits to the children. Next to the kitchen was a hallway with back stairs; the only ones the children were allowed to use. Every time they ran up and down the stairs, Spinola would have a tizzy. At the top of the staircase was a big room designated as the nursery where Hattie, the children’s nurse, was in charge of the babies. Napoleon Capps, a local man, was the caretaker of Argyle and tended the vegetable garden and the barnyard. These devoted individuals created the sure and steady rhythm of the Argyle household.

Each morning, the family would rise early for breakfast followed by a morning outing that wove through family and friends’ properties beginning at the top of King’s Creek over at Glenroy (now Kenmure). Immersed in nature and exploration, the community of cousins and friends would make their way either on foot or horseback down Greenville Highway through the woods until they reached Action Briars (location of Pinecrest Presbyterian Church) and then head back home. Swimming, fishing and picking berries were all part of the quest and differed each day as the group practiced courage and resilience. It was a whole other kind of education that lay a foundation for deep connections.

The household rule was to be home in time for 2:00 dinner, the big meal of the day. Supper was always light and the evening was filled with parties or bridge for the adults and games like kick the can or king of the mountain for the children. A favorite play area in the yard was Grandmother’s Oak, an ancient oak tree with multiple large limbs resting on the ground providing generations of little Kings with an obstacle course, benches and swings. Sometimes there were family picnics and bonfires with other families; roasting hot dogs and marshmallows, singing songs. Occasionally, there was a square dance or a ball.

Clifford King Harbin, (Alex King III’s daughter) fondly recalls summer days of independence and adventures with sixth generation Kings and her summer best friends, Gus Smythe and Jan Wardlaw from Charleston. “Every summer we would arrive at Argyle by June 1 and my grandmother would take all of us to Sherman’s on Main Street to buy each grandchild a new pair of Keds and a gray sweatshirt. We always took off our Keds at the backdoor and our sweatshirts hung on the hooks in the back hall for chilly summer nights.” Their daily outings were similar to her father’s route with the big treat of the day at Bonclarken’s camp store where they bought candy bars. On Wednesday afternoons they all went to the matinee at the Flat Rock Playhouse for $.25 and as teenagers they’d hide beer at the Highland Lake spring house and skinny dip in the ice cold creek nearby. Summer after summer, their indestructible relationships were cultivated and fortified by a lasting love. It was a joy-filled time.

As our visit with Alex King came to a close, I asked him to relate his favorite summer memory of Argyle: — fishing. His father, Alexander Campbell King, Jr., loved to fly fish and tied his own flies with hackles from the rooster on their property. Just down from the house was Erle’s Creek with a dam and a pond where Alex fished with his best friend, Wick Andrews, Wick’s Uncle, Punk Lowndes, (Alex’s father’s best friend) and his father. “Sometimes we would go down into the Green River Valley and fish the Lemon Hole. Once we got permission to fish the headwaters of the Green River, the Schenck family property, where I caught my biggest rainbow ever. My father knew exactly how to cook it — the most delicious fish I ever ate.”

In that tearful storytelling moment ,I realized what a refuge Argyle is for Mr. King; a grounding place where he escapes year after year to be healed and upheld by the magic of summer with family and friends. It is the heart of the King family and home for the last 190 years.

Missy Craver Izard was born and raised in Charleston, South Carolina. She resides in Flat Rock, North Carolina with her husband, Sandy Schenck, where their family runs a summer camp.