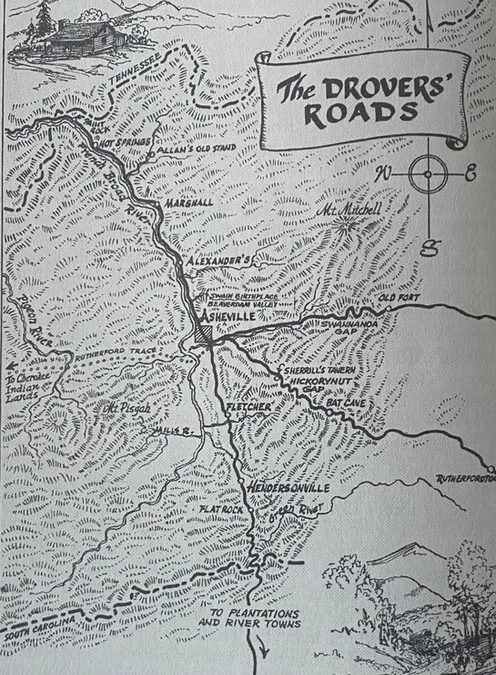 “The Drovers’ Roads” map from Terry Ruscin’s book, A History of Transportation in Western North Carolina. Images by the author.

In the early 19th century, there were few roads in the North Carolina Mountains. More often than not, what qualified for a road was a single-track Native American footpath, a “trace,” or paths left by wildlife. Passible by nothing more than a horse and rider, these primitive roads were treacherous trails cutting through gorges and across mountain peaks. But even on these well-traveled paths, mobility and growth were rendered difficult by the rugged topography and a scarcity of places to cross the rivers. As time passed, many of these early pathways evolved into wagon roads, paved roads and even highways, some of which survive today, at least in part, along their original courses.

Until after the American Revolution, Burke County had encompassed all of Western N.C. lands, and Morganton was the seat of local government. Burke was formed from Rowan County, which eventually mothered 32 counties. A new county of Buncombe was formed in 1792 from Burke and Rutherford that contained all of the old Cherokee summer lands to the Tennessee line.

Before railroads and with no navigable rivers by ship, everything had to go by way of oxcart, wagon or foot through N.C. The shortest and most travelable route between Northeastern Tennessee and Kentucky to South Carolina and Georgia passed through the counties of Buncombe that would become Madison, Rutherford, Henderson and Polk. The chief markets for Tennessee and Kentucky livestock were S.C. and Georgia. Asheville was the most prosperous city in the county with travel along the banks of the French Broad River and no mountains to climb. This road proved to be the most gainful method of transporting livestock; however, the roads leading further south were in wretched condition.

When Buncombe County was created, one of the first roads developed within the new county ran from the ford of Cane Creek near Fletcher, N.C., and southward to the Flat Rock settlement — connecting the various segments with Asheville. In 1793 a roadway was constructed that ran from within S.C. up to the N.C. state line. About 1800, this road was extended up to the Flat Rock settlement. To reach the settlement from South Carolina a very difficult climb had to be made up through Saluda Gap, located below the Green River Community in today’s Greenville, S.C., watershed. Once an ancient Indian trace called the Saluda Path, the trail ran parallel to the old U.S. 25 through Green River, Tuxedo, Zirconia and Flat Rock on to Asheville. Initially called the Drovers’ Road or Old Stock Road, when it was later improved, it became the Buncombe Turnpike. 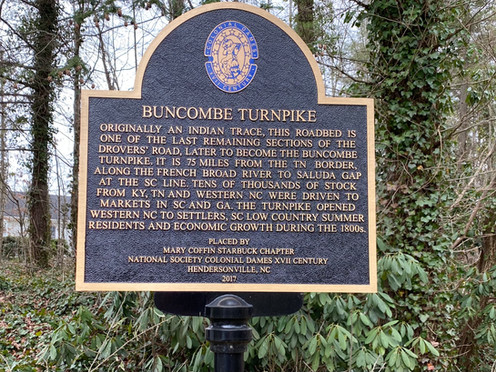 Roads continued to be a stumbling block to progress in Western N.C. Most of the roads followed streams necessitating fording and often hazardous travel. A trip on the roads required not only patience but fortitude and endurance.

Coincidently, in the state of S.C. road developments that would vitally affect the future of Western N.C. were brewing. Joel Robert Poinsett, a member of the S.C. Legislature, traveled extensively throughout the Western N.C. mountains and realized the potential wealth that could be developed by opening a better line of transportation from Charleston to the mountains. In 1819, the legislature created the Board of Public Works for directing various kinds of internal improvements. The most lasting achievement of the board was the construction of a road, “The Main Street of South Carolina,” from Charleston to Saluda Gap at the N.C. line where it connected with the early Drovers’ Road up the mountains past the Flat Rock tract, through Asheville and on to Tennessee. Conceived and constructed by Poinsett, this road was the first improved highway built in a section of the Carolinas through the old trading paths to the Blue Ridge Mountains.

By 1824, the number of drovers crossing through all of Buncombe County had increased so much that the N.C. Legislature incorporated the Buncombe County Turnpike. Nine commissioners from Buncombe, Burke and Rutherford counties were appointed to oversee the project and were authorized to sell $50,000 of stock in the company. They petitioned for and received a state charter to improve the road as a revenue-producing toll road. James Mitchell Alexander served as the contractor of the 12-foot-wide first-class road with a dirt and gravel surface.

Completed in 1827, the 75-mile Buncombe Turnpike followed the French Broad River through Western N.C.’s mountains to the state line of Tennessee. Built along the old Drover’s Road, it included Saluda Gap and Howard Gap Roads and was considered the finest route in all of N.C. According to Ora Blackmun, “It passed through the present Henderson County to Asheville, then stretched along the French Broad River to Warm Springs, and at Paint Rock joined a Tennessee road. The turnpike thus connected Greenville, South Carolina, with Greenville, Tennessee.”

The Buncombe Turnpike brought an unprecedented boom to the local economy. Farmers used the road to take their produce to market, and it was a godsend for the drovers. Tens of thousands of stock were driven to market between October and December. A bevy of support services, roadside inns called stock stands, sprang up to accommodate the drovers and their livestock. The stands needed thousands of bushels of corn to feed the drovers’ animals and would make deals with local farmers for their corn each year. Merchants in the area could import goods for local sale and regular mail service became possible. Stagecoaches began bringing tourists up from the flatlands, launching the birth of a resort area and summer colony.

Ora Blackmun, in Western North Carolina and Its People to 1880, relates the following: “When October came horses and mules were rounded up. Hogs were brought in from the woods; farmers collected their turkeys from their roosting trees and gathered the quacking ducks from farmlands. Once all was rounded up the trek to the turnpike began. For the next two months the Turnpike was alive with noisy, dust-raising animals on their way to slaughter.”

Normally, each herd owner, the drover, preceded his drove and would lead the way on horseback. Along with several helpers who walked along sides of the herds to keep the animals in line, these husky outdoorsmen cracked their long whips while their strong voices rang out commands the animals understood. The journey south would take up to a month, with a quicker return trip without livestock. Drovers could only travel about eight to ten miles a day. If they went faster, their animals would lose weight, reducing their selling price, or escape into the woods. Stand/inn owners along the road made a good living using their inns for tourists during the summer months and then for drovers in the fall.

Traffic on the turnpike peaked in the 1830s and ’40s with as many as 150,000 hogs passing through Asheville each month of the drive. By the end of the 1850s, drovers began to drop off with the gradual increase of railroads, and the years of the War Between the States reduced drovers and travelers to a trickle. After the war, people had little money to buy anything and railroads began to spread quickly. The drovers disappeared as fast as they appeared in the early 1800s. Stands reverted to farmhouses or were torn down for the lumber; some were left to rot.

According to Terry Ruscin’s History of Transportation in Western North Carolina, “In 1869, the Buncombe Turnpike Company turned over the route along the French Broad River to the Western North Carolina Railroad Company for stock in the corporation. The incursion of the railroad replaced the route as a method of transporting livestock. Traffic on the turnpike diminished with each successive stage of the railroad. The extension of counties’ public roads had a like effect. As traffic tolls dropped below the cost of upkeep, road stocks became worthless, and the turnpike companies had no other choice than to turn over their sections of the road to the public road system.”

The opening of the turnpike launched Western North Carolina as a resort area and led to the establishment of summer colonies including Flat Rock, “The Little Charleston of the Mountains.” It served as the main route of transportation for more than a half a century and laid the foundation for posterity in the area.

A remnant site of the turnpike is located near Mud Creek Baptist Church cemetery, at Dunroy, in Flat Rock. The National Society of Colonial Dames placed a marker there that reads: “Originally an Indian trace, this roadbed is one of the remaining sections of the Drovers’ Road, later to become the Buncombe Turnpike. The turnpike opened WNC to settlers, S.C. Lowcountry summer residents and economic growth during the 1800s.”

A History of Transportation in Western North Carolina by Terry Ruscin (The History Press, Charleston, S.C., 2016).

Missy Craver Izard was born and raised in Charleston, South Carolina. She resides in Flat Rock, North Carolina, with her husband, Sandy Schenck, where their family runs a summer camp.