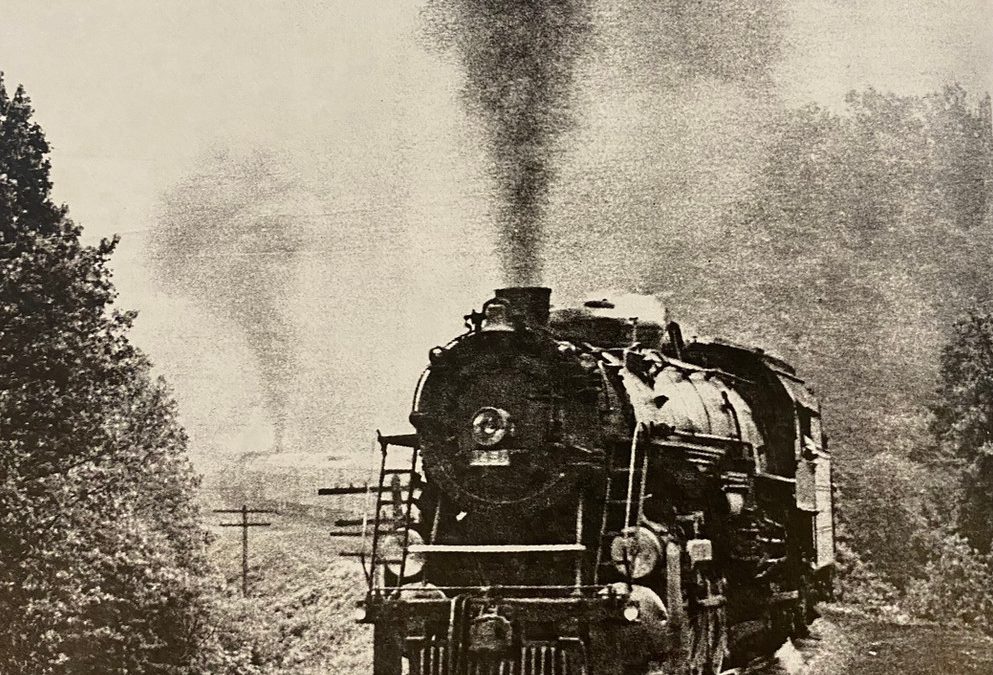 The Carolina Special — note the steam coming out of the helper engine in the rear of the train. Image courtesy Henderson County Genealogical and Historical Society.

The story of transportation in Western North Carolina began with drovers traveling on foot and horseback bound for Southern markets. The difficulties of their travel led to the creation of the Buncombe Turnpike in 1828 and the mountains of Western North Carolina became comparatively accessible. A trip to Flat Rock from the Lowcountry consumed between ten and 14 days on the new luxury stagecoach lines followed by provision wagons and servants.

Although the turnpike was dignified by its name, the road into the mountains was not a smooth surface and the topography was difficult at times.

In 1852, the state legislature chartered the Asheville and Greenville Plank Road to be laid over the Buncombe Turnpike until it reached Hendersonville where the route was changed to run the course of Main Street. Thick oaken or heart pine boards set on wooden sills overlaid sections of the turnpike stretching from south of Asheville through Henderson County. The concept proved to be financially impractical and short-lived due to the wear and tear of the wood. The planking never reached South Carolina or Asheville.

Judge Mitchell King paid his first visit to Flat Rock and Western N.C. in 1829, when he and his associates from Charleston were investigating the idea of building a railroad that started in Charleston, S.C., and connected to upper S.C., Western N.C., Eastern Tennessee and on to Cincinnati, Ohio. Thirty years later the tracks were completed from Charleston to Spartanburg and the first train pulled into Spartanburg on November 25, 1859. In her book Story of Henderson County, Sadie Smathers Patton recounts this exciting event: “It was a day of rejoicing for Spartanburg and upper South Carolina — a day which brought realization of ten years of hope — when the steam whistle heard from four miles away heralded approach of the first train to arrive over this line.”

The initial plans for the railroad called for these tracks to continue through the gaps of the Blue Ridge Mountains and open up the isolated area to the outside world. Soon after 1859, the Southern states seceded from the Union and further work on the railroad was halted until 1873 when C. G. Memminger of Charleston and Flat Rock met with his friend and coworker, Dr. Robert E. Cleveland of Spartanburg, to renew efforts for the rail line.

By 1877 tracks had reached Tryon, N.C., and from there the real difficulties in financing and construction began. In 1873 when work resumed, county bonds were to be sold in townships along the railroad to finance it. Trouble was experienced in selling the bonds. When the project nearly bogged down for lack of money and labor, the N.C. legislature ratified a bill in 1879 giving financial support and allowing convicts to be sent to help build the line. All the work was done by hand by unskilled convicts using pick, shovel and mule-drawn scrapes and carts. It was the first time convict labor had been undertaken in the United States.

The original 1850 proposals called for the railroad to go by way of Howard’s Gap, a route that entailed heavy grading and a series of tunnels. Funds could not be secured for this route’s costly construction. Captain Charles W. Pearson was hired to survey the Spartanburg and Asheville Railroad project, and when actual work began he was named as resident engineer. He selected an alternative route of crossing the Blue Ridge from Tryon through Melrose Gap and up the Saluda Grade. The objection to this route was the enormous grade from Melrose to Saluda — 600 feet in three miles. It was a difficult piece of engineering and construction, but the shortest and the best option financially. 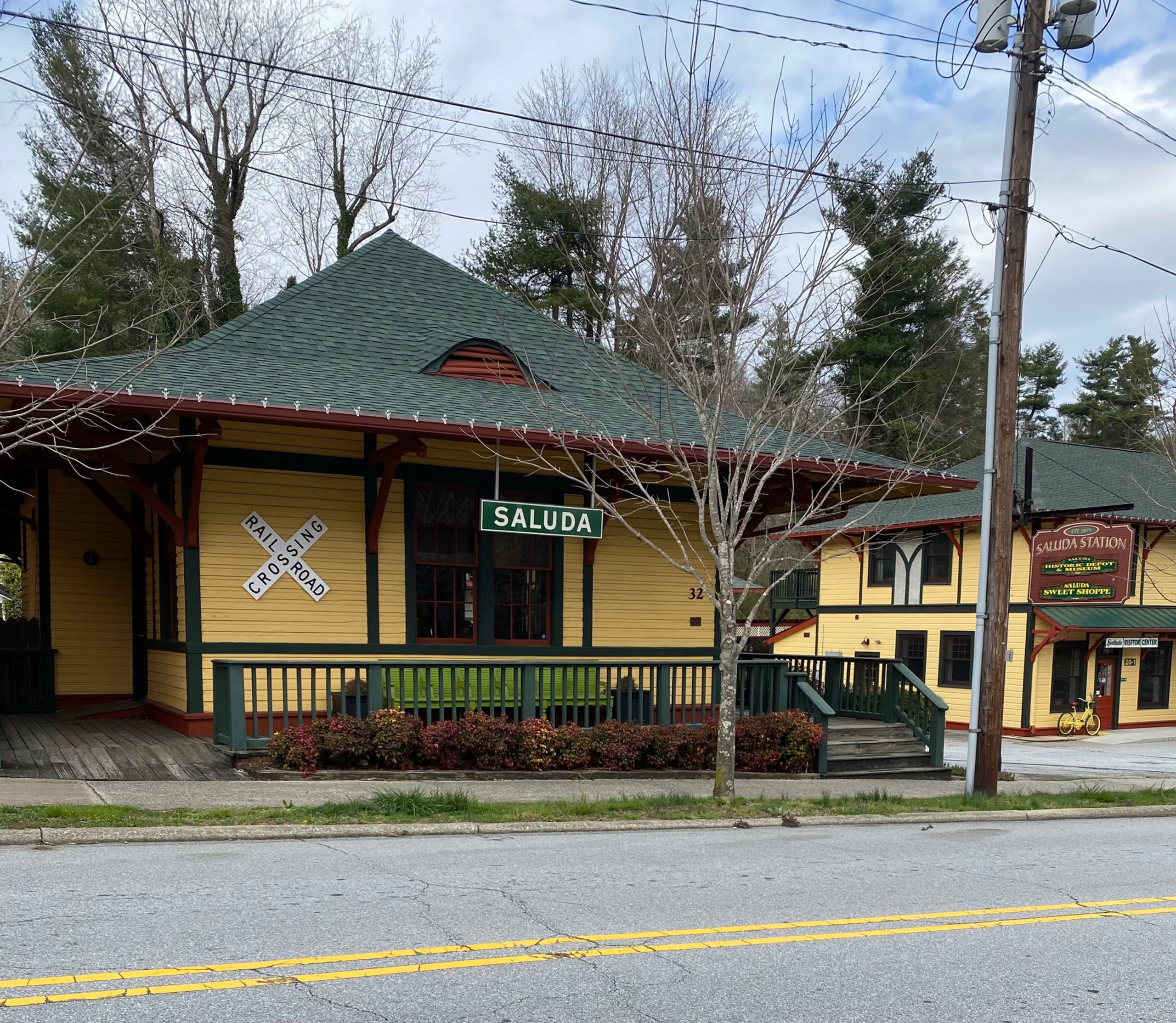 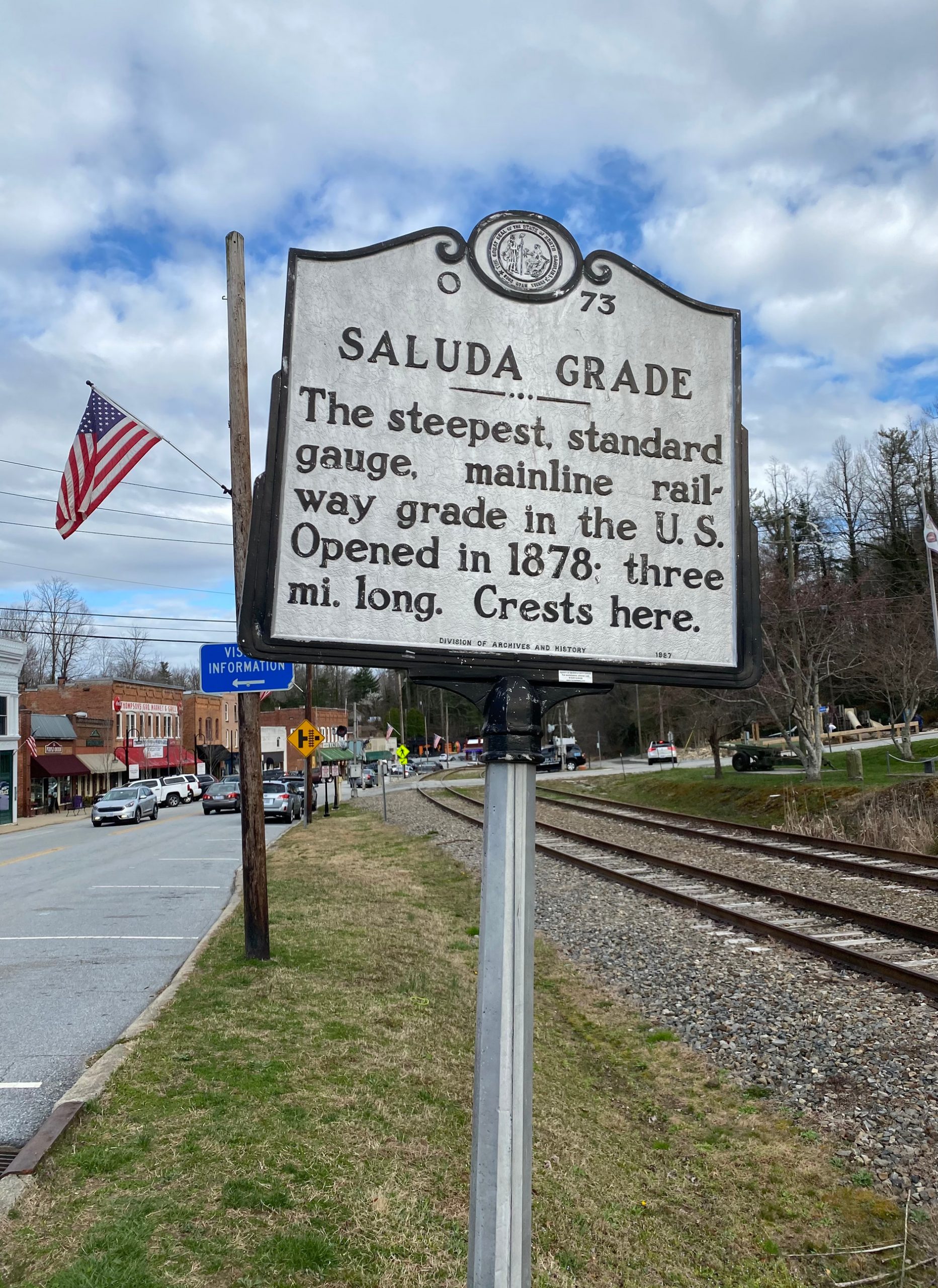 Grady Jefferys wrote about this incredible feat in his booklet “Crossties Over Saluda”: “When a mountain stands in the path of a railroad, there are three usual alternatives: Go over it, go through it or choose another route. When railroad men confronted Saluda Mountain, the options were more severely limited. The only choice — over the top!”

Pearson routed the roadbed up the steep gorge along the Pacolet River and up an almost vertical mountain wall. For years it was considered a marvel of road building engineering. It took its toll in both lives and money, resulting in the steepest main line standard gauge railway grade in America east of the Rocky Mountains. 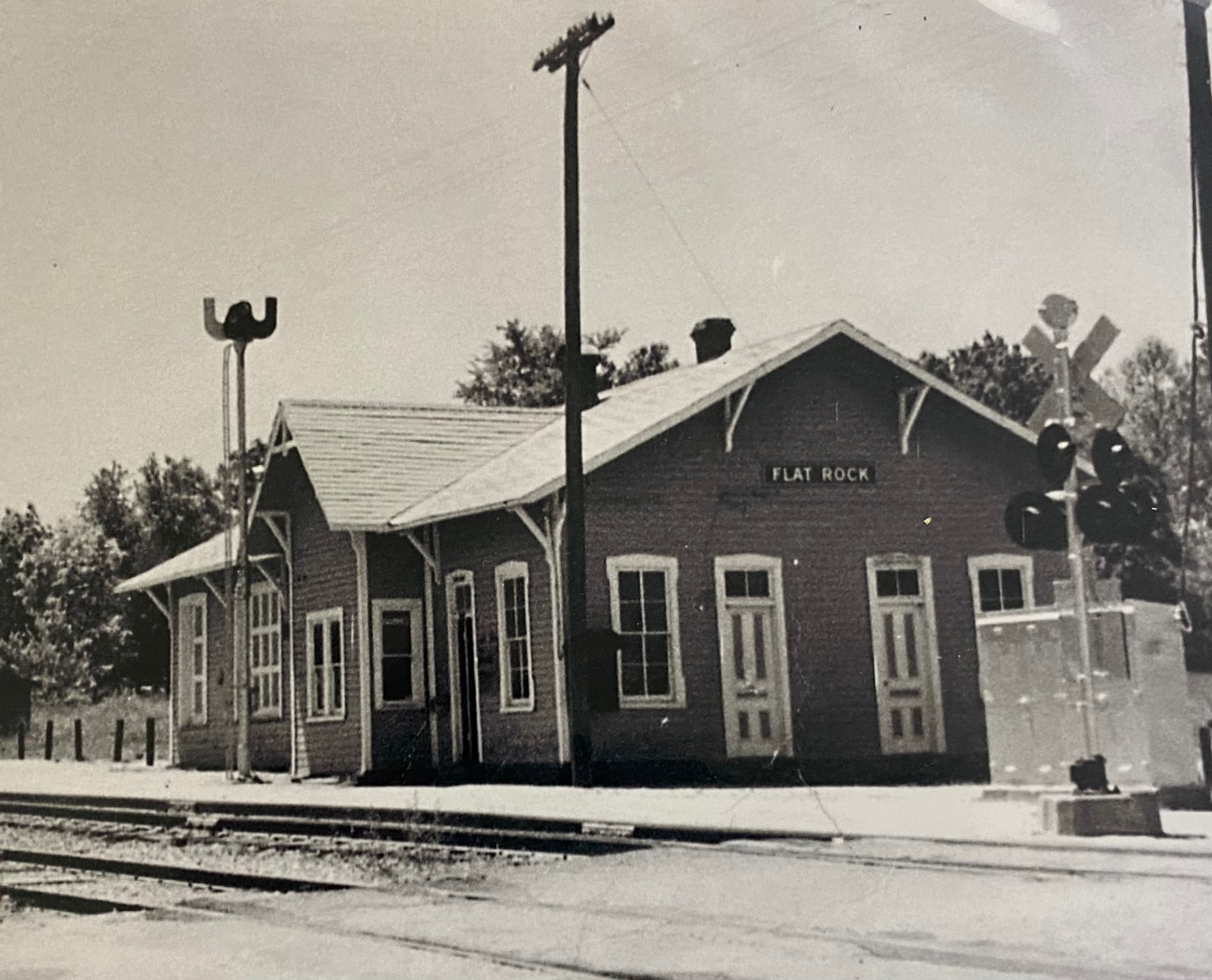 On July 4, 1878, the village of Pace’s Gap (Saluda) on Saluda Mountain celebrated more than Independence Day. The first passenger train of the Spartanburg and Asheville Railroad panted up the Saluda Grade to cheers of excitement. The ease of travel throughout the Southeast, particularly the railways connecting Charleston, Columbia and Spartanburg, accelerated development and the start of a new era for Western N.C. To the people of the mountains the railroad was more than just passengers and freight cars. It was a means to adventure, opportunities and excitement.

Before a diesel engine took the place of a steam locomotive, a help engine — “The Helper” — was necessary for northbound trains. Attached to the rear of the train at Melrose, the Helper provided additional power for the climb up the Saluda Grade. With one engine pulling and the other one pushing, the Helper, built for traction versus speed, propelled the last car of the train up the mountain. At Saluda the help engine was disconnected to wait for a southbound train. Since there was no place for the Helper to turn around, it backed down the mountain in front of the train to hold it back on the downhill grade.

A year after the train reached Saluda and exactly 43 years after Judge Mitchell King, Joel Roberts Poinsett and Robert Y. Hayne attended a Railroad Convention in Kentucky to inquire about the feasibility of a railroad route through Western N.C., the people of Henderson County saw a dream come true.

Frank Fitzsimons captures this moment in his book From the Banks of the Oklawaha, Vol. I: “The first steam engine hugged and puffed up the Saluda Grade; roared over the crest of the Blue Ridge Mountains; thundered down the long grade from Butte Mountain and East Flat Rock; and with screeching brakes and sparks flying from the wheels as the brakes were applied, came to a stop at the new depot in Hendersonville.”

Prior to the completion of the railroad to Hendersonville, financial difficulties that had plagued the builders from the start had grown worse. On April 4, 1881, the Western North Carolina Railroad Company was sold under foreclosure and in 1894 was reorganized with other railroad groups as the Southern Railway Company. It would be six years after the completion of the railroad to Hendersonville for the line to reach Asheville, just 22 miles away.

Originally, rail traffic was limited to passenger-freight trains until the completion of the railroad to Asheville. By the early 1900s there were a dozen passenger schedules daily with a peak of 14 and additional freight trains. The Carolina Special, a new and fast luxury Pullman train that ran between Charleston and Cincinnati with stops in Columbia, Spartanburg, Landrum, Tryon, Saluda, Flat Rock, Hendersonville and Asheville, brought passengers to and from the lowlands from 1911 to 1968. It became a lifeline between Charleston and the mountains and provided a means of travel for husbands and fathers to commute during the summer. Libby Maybank Guerard Wright remembers her father riding the Carolina Special up on Friday and then catching the 2:00 Sunday afternoon train out of Flat Rock back to Charleston.

Forty or 50 years after the coming of the railroad to the mountains of Western N.C., it was gradually replaced by highways, interstate systems and parkways. By 1910, automobiles were seen in Hendersonville and on back country dirt roads. Whether it was for pleasure or utilitarian purposes, cars and trucks were ushering in a new age for transportation.

In those early years, speed records were set and one such record was made by Libby Maybank Guerard Wright’s grandfather, John Maybank. In 1914, The Charleston News and Courier, on the front page, announced that John Maybank, a cotton broker from Charleston, his brother, Dr. Joseph Maybank, and a cousin, Frank Hanckel, drove an automobile from Hendersonville to Charleston in the unbelievable time of 17 hours. Frank Fitzsimons captured the headline story in his book From the Banks of The Oklawaha ,Vol. III.

“From Hendersonville to Charleston, 265 miles, is the record made on Wednesday by John F. Maybank, Mr. Frank S. Hanckel and Dr. Joseph Maybank in John Maybank’s automobile. The actual driving time of the touring car was only 15 hours, which is a record. The party left the mountain town at 5:00 a.m. and arrived in Charleston at 10:00 p.m., having stopped in Newberry for an hour and in Orangeburg for an hour. The average running time was 19 miles an hour, which in consideration of the condition of some stretches of the road was very fast.” The newspaper account did not mention the number of tires patched or changed or how dusty and dirty the travelers were after riding all that distance on dirt roads.

Whether it was by foot, stage coach, train or car, traveling to the mountains was always an exciting adventure and still is. It is hard to imagine a two-week journey by stage coach with our 70 mph speed limit now that I-26 makes the trip from Charleston to the mountains a four-hour drive. The Carolina Special was the pride and joy of railroad men and the traveling public. In this world of hustle and bustle, it would be nice to ride on the Carolina Special and visit with other passengers as it roars around the curve to the depot, whistle blowing and bell ringing, leaving a long trail of black smoke behind as it grinds to a stop at the station. Change is inevitable and it came to these Blue Ridge Mountains with a history woven of many threads — vision and tenacity, growth and prosperity — stories that define communities and wonderful memories.

Missy Craver Izard was born and raised in Charleston, South Carolina. She resides in Flat Rock, North Carolina, with her husband, Sandy Schenck, where their family runs a summer camp.