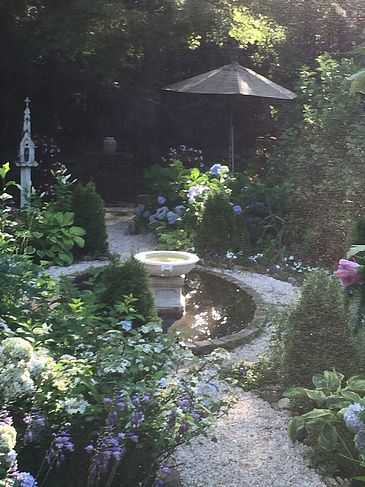 “A house should have a purpose, as should all people,” says Marty Whaley Adams Cornwell, Charleston native and nationally recognized artist. She was telling me this when we spoke about her beautiful home in Flat Rock called Elliott Place. She and her mother, Mrs. Emily Whaley, decided that their Flat Rock house’s purpose would be creativity — whether it is art, writing or music. “Exponentially the house could give a lot of happiness,” she said. From her many wonderful stories about the house, it sounds like Elliott Place has and continues to do so.

The property (which includes a guest house and gardens) sits high on a hill off Greenville Highway with a view of the lake at the end of a long, sloping lawn. Elliott Place was built in 1877 by Col. William Elliott who was a U.S. congressman from Beaufort, South Carolina. According to Historic Flat Rock, Elliott Place is “often call the prettiest house in the village.” The U.S. Representative constructed the house near the site of his father’s summer home, and at some point the house started to deteriorate. Marty tells me, “The Hartmans saved it.”

The Hartman family she is referring to are William and Virginia Hartman. The couple were traveling from Detroit to Florida during World War Two and happened to run out of gas coupons when they reached Hendersonville. While waiting for more coupons, they stayed in one of the many cottages that line Greenville Highway between Flat Rock and Hendersonville. One day while out on a walk, Mrs. Hartman walked up (what is now) William Elliott Lane to discover an old beautiful house falling in. Marty tells me that, “The shutters were nailed shut. The roof looked like it was leaking badly. The house was in terrible condition.” Eventually the Hartmans received their gas coupons and continued making their way to Florida. The following year, Mrs. Hartman wanted to share her discovery of this house with her husband. This is “a turning point for the house” Marty says. It was then that the Hartmans travelled back to Flat Rock with the mission to save Elliott Place.

After purchasing the house, the Hartman’s plumbed, heated, insulated, and winterized it. According to Marty, Mr. Hartman had a glass front hallway that went on the porch in the summer and Mrs. Hartman stenciled the back floor of the kitchen. It was their home, and they lived in it year round.

In the 1970s, the then ambassador to Libya and Peru, John Wesley Jones saw that a lot of places “needed to be saved” in Flat Rock. Marty said, “Johnny Jones persuaded the Hartmans to [have their house] be part of the Revolving Fund of Historic Flat Rock.” It was in 1978 that William Hartman “donated a Preservation Agreement to Historic Flat Rock, Inc., with a life estate in place for his wife. When Mrs. Hartman died, the agreement went into effect on the house, guest house and beautiful property, which reaches to Highland Lake. “ (Historic Flat Rock website) Marty explains that a “covenant was put on the property,” meaning the exterior cannot be changed nor can the property be developed.

In 1982 Marty bought the house from Historic Flat Rock and agreed to their easement terms. In 1985, her mother, Mrs. Whaley, became her partner in the property. Marty believes that Historic Flat Rack was interested in having them as owners of Elliott Place because their family had been part of the community for generations. It was Marty’s great-grandfather, Charles St. George Sinkler who bought High Hills in Flat Rock. When he passed away, her grandmother became the owner and then Marty’s aunt. “It made sense” that Mrs. Whaley and Marty came to own Elliott Place. At one point Marty’s sister, Emily Whaley Whipple, was partner in the property but years later sold her portion back to Marty and her husband Charles Cornwell.

One of Marty’s favorite memories of Elliott Place involves her mother and her mother’s Jack Russell, Rosie. In Marty’s opinion, she was “ferocious” and “mama spoiled her.” Every three days Mrs. Whaley would call and say, “Marty, it is time to have a party.” Mrs. Whaley would make her hors d’oeuvres (which included her sandwiches) and would fill the house with old and new friends. Rosie felt like it was her job to guard the food during get-togethers. At one of their parties, Marty recalls, their guest, David Dethero bravely went for a sandwich, and came back with Rosie hanging off of his thumb!

Marty’s stories of Elliott Place are endless and full of life. They include her mother playing the piano every night after dinner, and everyone dancing to the music. Marty says, “The party keeps on with music.” The house is a place where Mrs. Whaley wrote a book, and where Marty has created many of her exquisite paintings.

One of my favorite parts of Elliott Place is the porch. Marty claims at one point “it was the longest porch in North Carolina.” She goes on to say, “that porch has witnessed many dire and life-changing conversations.” I can attest to this. It was during a transformative talk on that porch with Marty I decided to go to graduate school.

“We’ve had a wonderful time in the 34 years we’ve owned [the house],” Marty says. Six generations of their family have played on Highland Lake. It was 20 years ago this May that Marty and her husband, Charles, celebrated their wedding at a reception held in the garden. Marty’s daughter, Helen, was married there and currently resides on the property. She tells me, “It is where we belong.”

This summer Historic Flat Rock will continue its anniversary celebration with a Garden Tour on June 22 featuring Mrs. Whaley’s Mountain Garden at Elliott Place. Marty tells me that she and her mother created the garden together. She recalls that early on that the central part of the garden had two enormous pine trees. Lightning struck the trees, which resulted in them being removed. In the place of the trees, there is now a pond and archway. All of this and more create the charming garden, referred to as Mrs. Whaley’s Mountain Garden.