Lives and locales bound by preservation by Missy Schenck 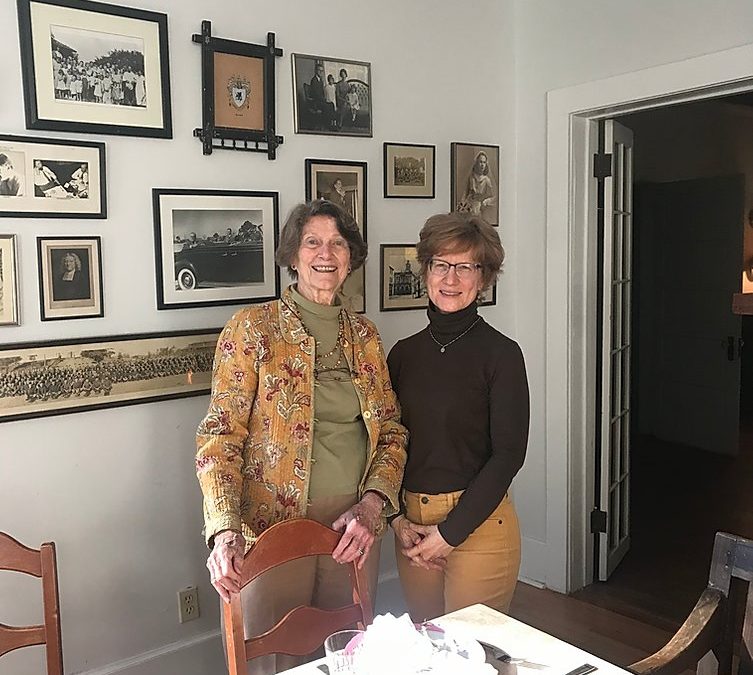 Anne “Annie” Guerard Coletta was born and raised in Charleston and spent her summers in Flat Rock, North Carolina, where her family has gathered for generations. She is the direct descendant of six former South Carolina governors:  Thomas Smith, Rawlins Lowndes, Robert Gibbes, James Moore, William Aiken, Jr. and her grandfather, Burnet Rhett Maybank, the 99th governor of South Carolina, mayor of Charleston and a United States senator. Her father, Theodore Guerard, served in the House of Representatives. It’s no wonder that Annie took to politics after moving to Flat Rock, N.C. full time in 2010 with her husband, Paul and son, John. She is the first female in her family to hold elected office, but credits her mother, Elizabeth Maybank Guerard Wright (Libby), as her role model for standing up and fighting for what is important.

When Annie was in middle school, her mother along with a few others organized Save Historic Charleston and fought the city’s proposed demolition of a large section of old buildings between East Bay and King Streets just north of Broad, where a private developer had plans to build a huge convention center.

When Annie was in middle school, her mother along with a few others organized Save Historic Charleston and fought the city’s proposed demolition of a large section of old buildings between East Bay and King Streets just north of Broad, where a private developer had plans to build a huge convention center. and if that place is threatened, you need to act … and act, she did. In 2011, Annie organized a group of Flat Rock residents, The Friends of Highland Lake, to oppose the development of the Highland Lake Golf Course into a soccer complex by Henderson County. As a result, the Flat Rock Village Council voted against the sale to Henderson County and agreed to purchase the property for a village park. A non-profit foundation was formed and The Park at Flat Rock was born.

Annie Coletta’s family, the Aikens, Rhetts and Maybanks, have a long history with Highland Lake and the land that is The Park at Flat Rock. The Honorable William Aiken, Jr., the 61st governor of South Carolina and a U.S. congressman, purchased all of the acreage that is now Highland Lake in 1873 from George Trenholm (second secretary of the Confederate Treasury). Originally, part of a land grant to John Earle in 1789, it is the earliest land grant known in the area that became Flat Rock in 1807. William Aiken and his wife, Henrietta Lowndes, gifted the land to their only child, Henrietta Aiken Rhett, Mrs. Andrew Burnet Rhett, whose father-in-law, Robert Barnwell Rhett, owned the 19th-century Charleston Mercury and was the author of the first draft of the Ordinance of Secession. The grist mill established by John Earle on the property was renamed Rhett’s Mill and the lake became Rhett’s Pond.

In 1910, Henrietta sold 259 acres of her property including the mill and lake to Joseph Holt from Alabama for a development called the Highland Lake Club. Mr. Holt along with a group of businessmen from Charleston and Columbia formed a corporation and bought nearly 500 acres of land in the Flat Rock area. The land was subdivided into lots and sold for summer homes with Highland Lake Club privileges including swimming, boating, fishing and a newly designed golf course. Unfortunately, the club failed after two years and the property began a succession of boarding schools and summer camps until it was bought by the Lindsey family in 1985. The Lindseys transformed the acreage into the Highland Lake Inn and Resort and divided large portions of it into neighborhood developments. Sadly, part of this included demolishing the old Rhett House that stood on the estate for decades. In 1999, the Grup Family purchased a portion of the property and lovingly restored the Inn and Resort. They continue to operate it today.

Henrietta Rhett retained part of her land, including seven acres east of the dam site that she transferred to her daughter, Harriet and her husband, Dr. Joseph Maybank. This parcel is where The Dam House is located and is now owned by the Maybanks’ great grandson, Joe Maybank and his wife, Virginia. According to the National Register of Historic Places, “Mrs. Rhett also platted approximately 15 small lots on a point of land extending into the lake midway along its eastern shoreline. In the 1910s and 1920s, five summer cottages were constructed on Rhett Drive, as it was known, creating a small enclave of bungalow-style and Colonial Revival- style residences.” One of these cottages, built around 1912, was purchased by Burnet Rhett Maybank (son of Dr. & Mrs. Joseph Maybank) in 1930 from a member of the King family. Burnett and his wife, Elizabeth deRosset Myers, had three children including Annie’s mother, Libby. When Annie’s grandfather died while in Flat Rock, the house and land were divided equally among his three children. The cottage went to her uncle, Burnet Maybank and her mother and Aunt Roberta, each got equal shares of land. Over time a family compound has evolved along Rhett Drive and it is where Annie, her two siblings (Elizabeth Guerard Parker and Russell Guerard) and their mother all have cottages.

It takes a village and a labor of love to convert a golf course into a park. Annie’s family story came full circle when she rallied her relatives to raise funds for the Maybank-Rhett Nature Center located within the heart of the Park at Flat Rock. “I’m fortunate to be a part of a very generous family who has been connected to Flat Rock since the 1850s, particularly in the Highland Lake area near the Park. The Nature Center will provide a space to display information about the wildlife in the Park and Western North Carolina — and we are happy to help make this happen,” says Annie Coletta.

Annie Guerard Coletta secured her first seat on the Flat Rock Village Council in 2013 and served in that capacity until 2017. In 2018, when the historic fiber of Flat Rock was threatened once again, Annie reminded her community that “you do not need to be an elected official to make a huge difference in where you live.” A group was assembled and together with Annie as their leader, they formed The Cultural Landscape Group:  Flat Rock to oppose a DOT plan to North Highland Lake Road. The newly created Park at Flat Rock stood to lose a portion of its land and the scenic entrance to Flat Rock was at stake. The controversy that incurred led to the most heated Village Council election in the history of Flat Rock, including the return of Annie to her council seat in the 2019 elections.

She says:  “As it was for centuries past, the Village of Flat Rock is still a place to escape the summer heat of the Lowcountry, but it is also now a village with year-round residents in a fast-growing county. I grew up coming to Flat Rock every year, as my mother’s family has for generations and I have seen Flat Rock grow in population, yet keep its rural sense of place. I think it’s important that we retain our rural mountain character even as we work hard to develop solutions for any issues that may arise.” This year celebrates Libby Wright’s 90th summer in Flat Rock. Her children look forward to gathering again on Rhett Drive for a nostalgic feast of their mother’s Flat Rock days and a place of laughter, tears and deep relationships. She notes, “Growing up there were no telephones in summer cottages. The Andrews lived in Flat Rock year round and had one of the few phones in the area. My father was a U.S. senator and was needed frequently for government affairs. One summer during World War Two, Wick Andrews swam across Highland Lake to our house to let Papa know President Roosevelt had called and needed to speak with him right away. Mr. Hill’s store in East Flat Rock was the location of the only telegraph station in the area. Mr. Hill would deliver telegraphs for 25 cents. My father often got several a day. After multiple daily trips to our house, Mr. Hill accumulated quite a sum from my father. Papa politely asked Mr. Hill to wait until late afternoon and deliver the telegraphs all at once. This did not sit well with Mr. Hill. Another time there were days of torrential rain and all the dams in Henderson County broke. We were not allowed to go down on the road below Highland Lake for fear the dam would break. It was the only dam in the area that did not. ”

Libby Maybank Guerard Wright has outlived much of the Flat Rock she knew growing up. Still, it is her second home and a place of family history. Year after year, the smell of the mountains, catching fireflies, picnics on the Green River and playing games pull her family back …and now, so do politics again as Annie Guerard Coletta carries on the family legacy in the “Little Charleston of the Mountains.”

Missy Craver Izard was born and raised in Charleston, South Carolina. She resides in Flat Rock, North Carolina with her husband, Sandy Schenck, where their family runs a summer camp.

This blog by Missy was syndicated from her article on The Charleston Mercury.
https://www.charlestonmercury.com/single-post/2020/06/04/Lives-and-locales-bound-by-preservation