‘Many Pines’ home of many Flat Rock memories by Jane Izard 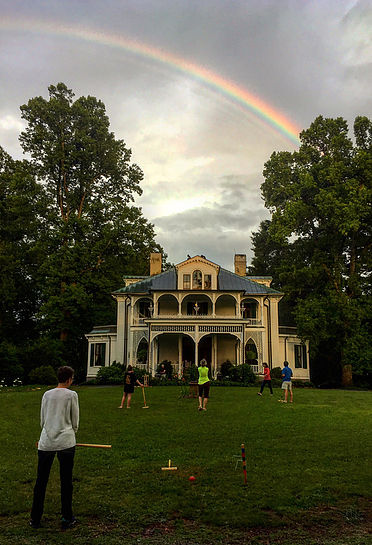 “My family has owned this house for over 100 years,” says Langdon Edmunds Oppermann. The house she is referring to is Many Pines, a beautiful complex consisting of a main house and its outbuildings in Flat Rock. Langdon jokingly tells me the house is “constant maintenance.” However, she and her husband, Joe, are perfect caretakers for this historic property they acquired from her mother, Frances Edmunds. Both are professionals in historic preservation working in Winston-Salem. Langdon is an architectural historian and Joe is a restoration architect.

Many Pines was built in the late 1840s by James R. Pringle of Charleston. Langdon and Joe note the architectural elements and the dating of the living trees help determine the year the house was built. Four avenues surround the house, the most significant being the avenue of white pines leading to the main house at the crest of a hill. The dwelling is unique because it is one of the few houses in Flat Rock that has retained its row of outbuildings extending from the main house. These buildings include the original kitchen building, vegetable house, servants’ quarters, corncrib, pump house, paint house, laundry, barn, stone dairy, and the caretaker’s house.

Nearby is a simple late-19th century cottage. Langdon says, “Summer places couldn’t exist without the support of the additional buildings.” Such structures played a large part in the day-to-day operations.

In 1887, Arthur and Louisa Barnwell bought the home and did a major remodel. Langdon says “They took a box-shaped Greek Revival House and made it more Victorian and vertical.” The Barnwells added a Victorian portico, two one-story bays on the side and cresting on the roof. The also changed the roof to add more room. The Barnwells sold the property to a polo player, K.G. Whistler, in 1902. According to Langdon he was “was a character, sort of a questionable character. They used it only a few years and then rented it. Among the renters was Frank Hayne, who then bought Beaumont [in Flat Rock].”

In the 1940s, Langdon’s grandparents bought the house. It still had “dark Victorian colors” and was “pretty out of style.” There was no electricity, and one had to get around with a kerosene lamp. Joe says today that there are still “places in the house with brackets for kerosene lanterns.” In 1941, her grandparents had to decide between painting the house white or putting in electricity. They decided to paint the house! With World War Two, much more could not be done and the house was not electrified until 1946.

Langdon and Joe recall stories about her grandfather, Mr. Smythe, and the caretaker, Mr. Jones. Mr. Jones was part of the many generations of caretakers living at Many Pines who would care for the animals and work on the house while the family was away. Communication between the two men was done by letter, sent by trains to-and-from Flat Rock and Charleston. Langdon has their correspondence of all “sorts of things” and her “grandfather liked to type letters to the caretaker.” For example, Joe said that Mr. Smythe “would send a message to the caretaker on the train — ‘Would you please kill chickens and send a bushel of apples.’ On the train the next day would be chicken and apples! One time Mr. Smythe sent a typewriter on the train to Mr. Jones with a letter saying something to the effect of, “I’m sorry I have so much trouble reading your letters. Can you please type them?” Langdon says, “[Unfortunately], the caretaker didn’t know how to type!”

Growing up, she tells me “several families would be” at Many Pines for the summer. She is very close “with all of her cousins because they spent all of their summers together … [and] the reason is because of that place” People would “pile in” the house, and some rooms would “have four beds in them.” Everyone “gets along well.” When there was a problem they would blame it one someone’s dog. Langdon laugh and says, “Everyone would complain like mad about a dog!” They say, “Our children are close to [their] cousins for the same reasons.” Spending time together as an extended family in the summer is very important. She goes on to say, “It has not been a good summer unless someone has been stung by a bee, had poison ivy or gone to the emergency room!”

The house still has no television or Internet. Joe and Langdon are clear:  “That is on purpose.” They tell me that when their children were little they would have friends come stay with them. When their children’s friends found out there was no TV, “they couldn’t imagine it.” Langdon continues, “But an hour later they would be playing in the trees.” To this day, their children and their friends “look forward to” their time at Many Pines because of the lack of technology.

Many Pines continues to be the special place where the many generations of Smythes flock to each summer. “The house purpose is about family,” Langdon tells me. Two years ago, they hosted the “Smythe Summer Games.” There were 64 family members that gathered for the event ranging in age from one to 94. Costumes were worn and games involving greased watermelons, dodge ball and egg tosses were played. “People came because it was at [Many Pines],” Langdon says. They will host the games again, but not every year. To Langdon and Joe, Many Pines embodies “the importance of place and keeping family together.”