The Dam House by Jane Izard 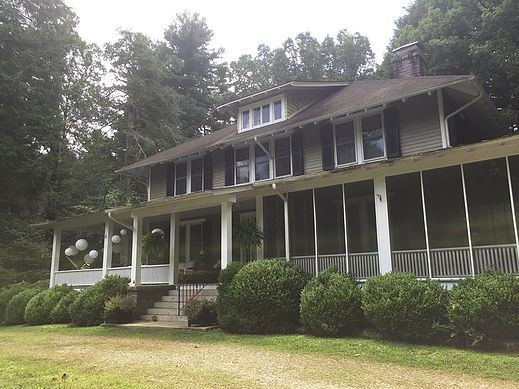 “Flat Rock was one of the places my grandfather was the happiest,” says Frank Maybank. That grandfather, Dr. Joseph Maybank, along with his wife, owned the Dam House at Highland Lake in Flat Rock. Highland Lake and the Maybank, Rhett and Aiken families have a long history. Governor William Aiken purchased the property, the mill and the lake from George Trenholm in 1873. He then gave the land to his daughter, Henrietta Aiken Rhett who was married to Major Andrew Burnet Rhett. According to the National Register of Historic Places, “In 1910, Mrs. Rhett transferred two lots east of the dam site to her children.

Similarly, Henrietta Rhett also platted and sold approximately 15 small lots on a point of land extending into the lake midway along its eastern shoreline to interested friends. In the 1910s and 1920s, five small summer cottages were constructed on Rhett Drive, as it was known, creating a small enclave of bungalow-type and Colonial Revival-style residences.”

Frank tells me that his grandmother was the only daughter of Henrietta Aiken Rhett and Major Andrew Burnet Rhett. As a wedding present, a house was built on the land given to her and his grandfather, Dr. Joseph Maybank. The house is known as the “Dam House.” Frank tells me that his grandparents had a lot of children and he recalls there being a “… parade of (people) coming to stay with them in the summer.”

Frank began his relationship with Flat Rock at age six by coming “up for two or three weeks” with his parents to visit his grandparents at the Dam House. Frank says they had a “terrific cook named Mamee” who would prepare delicious meals in the Cook House — a building separated from and located behind the main house. Frank recalls that “all of the Rhetts around the lake were called ‘The Rocking Rhetts’ because they’d sit in their rocking chairs rocking and talking.” The house was in their family for 50 years. In 1942, Dr. Maybank passed away and in 1950, his children sold the house to Cy Young but in 2002, Joe and Virginia Maybank purchased the Dam House, bringing the beloved residence back into the family.

Virginia spoke to me recently on her annual drive from New York to Flat Rock. Before they bought the Dam House, Virginia says “we didn’t know a house was up there.” Since purchasing, they haven’t “done too much to the place.” A walkway now connects the home and the kitchen; further, “… we redid the kitchen and the bathroom.” She tells me that it “takes two people to move the doors because they are made of cypress.” All of the stone from the mantle pieces, to the house steps and the stone the house sits on was quarried on site.

To her and Joe, the house represents a place where they can all get together as a family. “All of the Maybanks are there in the summer,” she tells me. “The house is a great house for entertaining … we have lots of parties on the wraparound porches. One time we were having a brunch party and the two dogs started barking like crazy. We let them out and the dogs hushed up. Later Joe goes out to take a nap on the hammock. He looks up to see a mama and her three cubs up in the tree. They had been there the entire party!” There are a few traditions that Joe and Virginia have started at the Dam House. For example, every afternoon at four, a group will swim out to the middle of Highland Lake to “tread water for 45 minutes and gossip.” Another is that everyone in the family tries to be there for Joe’s grandmother, Mrs. King’s and Joe’s birthday in July.

The most famous however is “Jay’s ribs.” Jay is Joe and Virginia’s son and every summer he does a rib dinner. Virginia says there was one time “two people were in the ER … quickly got out to come to the rib dinner.”

The Maybanks tell me Joe “has never missed a summer in Flat Rock his whole life. None of their children have either.” Joe said it was his “father’s rule that they always had to spend some time in Flat Rock.” Not a bad rule to live by!