The Little Hill by Jane Izard 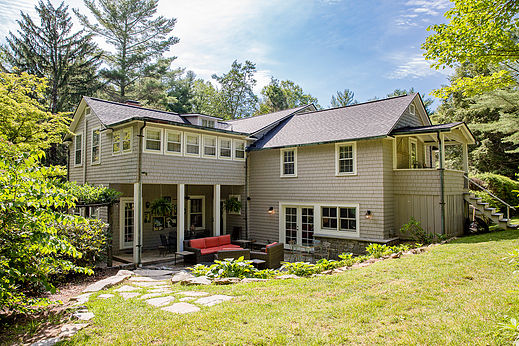 The Little Hill has “always been a welcome place for everyone,” says Patty Laurens Adams. This beautiful property near the center of Flat Rock has been a part of the Laurens family since 1907. Her great-grandfather, Henry Rutledge Laurens of Charleston, purchased the 23 acres of land from the estate of Squire Farmer. “The land had been the site of one of the oldest inns in the region, the King’s Tavern,” according to John “Chip” Laurens, III, Patty’s brother. Often called, more simply, the “Old Inn,” it was part of the Woodfield Inn property until their great-grandfather’s purchase.

Keeping in line with the hospitible theme, Chip says, “The Inn was always here welcoming people … [it] was used as a welcomed refuge from the arduous climb into the mountain[s] … from the midlands or lowlands of South Carolina.” The actual site of the Old Inn is Front Field, bordering Highway 25 between The Little Hill’s main entry and the entry to Woodfield Inn. He tells me that, “Flat Rock’s first post office was in the Inn. Locals objected to it because they didn’t want a brewery [in the same place as] a post office.” During the War Between the States, the Inn burned; all that remains is the old spring. Chip says, “The spring basin was carved from a solid piece of local granite and had a granite trough that fed cold water into a covered springhouse… [it is] surrounded by rough granite slabs, steps, and an old primitive stone bench.”

Henry Rutledge Laurens never built a residence on the property. According to Chip’s History of The Little Hill, “Henry and his wife, Charlotte Hume Simons ,had brought eight children into the world from 1886 to 1898. By the time he purchased the Flat Rock property at the age of 60, he did not have the energy or the enthusiasm to build a summerhouse that would accommodate his large family.”

In the 1930s, the eldest son, Henry Laurens of Charleston, and his wife, Dorothea Dexter Laurens of New Haven, Connecticut, purchased the property from his seven other siblings. At that time, Henry Laurens was head of the Department of Physiology at Tulane University in New Orleans. Chip recalls, “My grandfather was convinced that Gaga (Chip’s grandmother) needed to get out of the heat and drinking climate of New Orleans. The salubrious climate of North Carolina [was the answer].” The Dean of the School of Architecture at Tulane, J. Herndon Thomas was commissioned to design the house and “Gaga wanted the house built in a Cape Cod image” says Chip. “She loved the simple shingle cottages she had known on the beach at Pine Orchard, Connecticut and had the house designed without the typical large windows, eaves and porches more representative of summer dwellings in the South. The plan has the garage, kitchen and a servants’ stair at the rear, with the breakfast-room, dining room, main stair hall and living room located across the front of the house.

“The second floor was designed with only two bedrooms and a large dormitory that opened onto a rear-sleeping porch. Two servants’ bedrooms were at the second floor rear over the garage. The living room opens onto a flagstoned porch and wisteria arbor that leads to a small two-bedroom guesthouse. The arbor was an original feature of the architect’s design. The caretakers, who worked with local masons, horse drawn scrapers and hand labor, laid out the grounds and white gravel chat roads in the typical Flat Rock style. The hemlock hedge around the cutting flower garden at the South end of the residence and the large white pine and hemlocks lining the roadways and fields were all transplanted from the surrounding forest. The forest begins behind the main residence’s west elevation and slopes gracefully down to Ravenswood Lake at the rear of the property.”

Chip and Patty, along with their two other sisters and parents, Dr. John Laurens II and Helen, lived in Little Rock, Arkansas and would go to Flat Rock during the summer. Patty tells me, “Mom was all about her children wanting to enjoy [The Little Hill] …growing up, it was all about being at the house and with family.” The Laurens children would go to camp in Western North Carolina and then from camp go to Flat Rock. Friends and family from Charleston and Little Rock were always coming to visit in the summer according to Patty.

In 1973, Dr. and Mrs. Laurens purchased the house from his brothers and they became full time Flat Rock residents. Patty reminisces of time when she was in college in South Carolina and her parents would go visit her eldest sister’s family. Her parents would tell her to “bring friends up and give them the house.” My mom would go get inner tires of 18 wheelers and have them blown up. Dad had a truck and we would all go to the Green River and tube.”

Another funny story that Chip and Patty convey is about a time they were having a house party and were playing a softball game on the front field. Chip recalls his mom going to McFarlans Bakery and getting “40 cream pies,” opening the car on her return and having a “huge cream pie fight!”

In 2014, Patty and her husband, Jeff, along with Ed and Sydney Taylor purchased the house (Ed was formerly married to Patty’s sister Martha Dexter Laurens, who passed in 2004).  The house is a place where at least twice a year “all of the cousins can get together,” says Patty. “We always go up for Easter and Thanksgiving.” Patty says that for Thanksgiving “Chip makes place cards with questions about Laurens’ family history. And he is often the only one who knows the answer!” Hats are usually involved, including some that were Patty’s mother’s. “It is a great time for everyone.”

Traditions at The Little Hill started with Patty’s mom. During the fourth of July, Mrs. Laurens would have all of the grandchildren come up. Patty says, “[she’d] illegally shoot fireworks and have hotdogs. Jeff and I started doing that [too].” They carry on the tradition and invite friends, grandchildren, their children and their children’s in-laws for a fun time.

Patty tells me that because “No family is [living] in Little Rock, so Flat Rock is our childhood home.” She along with her two sisters were married in Flat Rock, Patty’s two daughters have been married there, and many of their family is buried at St. John in the Wilderness. To Patty, The Little Hill offers the magic of  “having a place to celebrate our lives.”