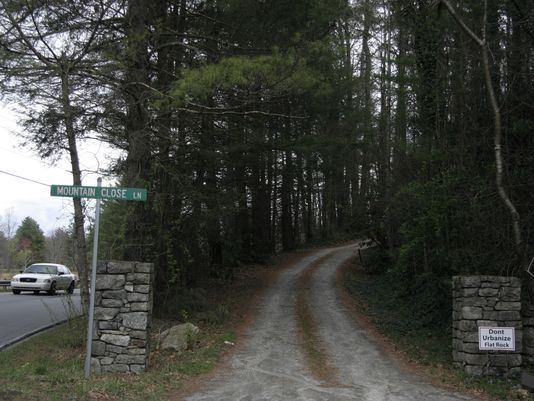 Having traveled a mile forward and 200 years into the past on North Highland Lake Road in Flat Rock last week, we now train our sights on Highland Lake, the entrance to which is a quarter-mile back toward Spartanburg Highway.

The lake, a half-mile-long body of water — and if it’s a body, it looks like a shapely dancer with arms and legs extended — lies in the middle of a rocky hill through which King Creek swells before joining other streams to reach Mud Creek at U.S. 64 and then the French Broad River in Fletcher.

The uneroded highland plateau has provided the idyllic stage for sojourners and settlers from Cherokee conventioneers to contemporary villagers. As noted last week, NCDOT’s plans to make North Highland Lake Road a thoroughfare, expedited by the village council, threatens the landscape and historic properties, a key part of a National Historic Landmark.

In 1848, Charles Baring built his home, Solitude, on the outcrop after his powerhouse wife, Susan, had died. They’d been the leaders of the Charleston migration to Flat Rock, starting in 1827. In the 1870s, Andrew Burnet and his wife, Henrietta Aiken Rhett Burnet, established a water-powered powerhouse on King Creek where it spills toward North Highland Lake Road. Their story will take us through the Civil War and up to the  present day in a future feature.

First, we are diverted at Pinecrest Presbyterian Church, where North Highland Lake Road meets Greenville Highway and where the Park of Flat Rock ends in a shoal that displays Carolina marsh clam shells.

The spirit of Isabella

Before the Civil War, Isabella Middleton Cheves and her husband, Charles Manly Cheves, had made their home, Acton Briars, on a ledge at the bottom of the hill where it sloped to Memminger Creek.

Isabella had been one of the belles who spent summers in the Flat Rock colony where genteel Charlestonians went to escape heat and mosquitoes.

“I feel like walking for miles, and am a perpetual laugh,” 26-year-old Isabella wrote her mother, Harriott Kinloch Middleton, from Flat Rock. Harriott was in Newport, Rhode Island. The October-like weather in July 1852 was intoxicating, Isabella rejoiced. “It is Sunday and all the world at church,” she continued, “but I am sure I never could sit quiet such a day as this.”

The letters of Isabella and other relations are collected in Robert Cuthbert’s book “Flat Rock of the Old Time: Letters from the Mountains to the Lowcountry, 1837-1939” (University of South Carolina Press, 2016).

It is not clear where Isabella was staying in Flat Rock in 1852. The date of the opening of Farmer’s Hotel is variously given as 1852 or 1853. (Squire Henry Farmer, its owner, was a relation of Susan Baring.) Previously, there was the Old Inn, and the big homes of early settlers, such as Judge Mitchell King’s 1830 house, Argyle, with its six bays, two stories, full-length porch and three gabled dormers, which accommodated a steady flow of family members. He had 18 children from two wives, and threw parties.

“The arrival of (King’s) caravan of supplies, slaves, and oftimes 23 relatives,” Blanch Marsh wrote in her 1961 book, “Historic Flat Rock,” “was an exciting annual event in Flat Rock.”

“The community was steadily growing,” Susan Lowndes Allston wrote in “Early Sketch of St. John in the Wilderness and Flat Rock.” “Households for the most part were cared for by good Negro servants, who made part of the cavalcade necessary to a planter bringing his family to the mountains. Some of these servants attended St. John’s.”  Eventually, the African-American community built their own church.

Isabella Middleton had grown up knowing Flat Rock as an educated, protected, traditional belle would. She enjoyed a flirtatious life in the Jane Austen mode and, at age 20, married 21-year-old Charles Cheves. Charles, son of Judge Langdon Cheves, was on his way to becoming a physician and wealthy rice planter.

By 1852, Isabella had three children, and she and Charles were looking for a home in Flat Rock.

“Charley has found a sight (sic) for a building overlooking Mr. Bearing’s (sic) mill pond and belonging to him,” Isabella wrote her mom, “but whether he will sell or not is very doubtful.” They’d previously been shown Mr. Maxwell’s property, “but it was too high and windy and the hill in front almost perpendicular, water being raised by buckets attached to a wire.”

Let’s say that at the time, Isabella was staying at Farmer’s Hotel. Farmer had engaged the Barnett brothers, leading builders in Flat Rock, Allston related, to build “a stalwart, three-storied house, with two tiers of piazzas in front,” the top tier of which was often filled with people in rockers gazing at the mountains.

(Farmer’s Hotel became Woodfield Inn in 1939 and survives as Mansouri Mansion, an inn, restaurant and wedding venue in operation since 1981.)

On Aug. 26, 1852, Isabella wrote her mother, “La Tante has arrived,” referring to her 52-year-old aunt, Eweretta Barnewall Middleton. La Tante was not happy. Her stagecoach had broken down on the way; she’d arrived at 11 p.m.; and there wasn’t a room for her until some shifting was done.

She had to be happy, however, with the new hotel.  Traditionally, summer residents from Charleston, in order to gain Flat Rock’s “champagne air,” as one traveler had called it, had had to suffer rough roads and rustic abodes.

“The vulgarity and dirt which is encountered on the road between Carolina’s chief city and these mountains really make one doubt one’s own claim to decency,” 26-year-old Emma Middleton Huger wrote Eweretta, her second cousin, on Aug. 4, 1839.

Many Flat Rock maidens, in the late 1830s, were writing to Eweretta, who’d already started her family and preferred to stay in Charleston despite the 1 in 10 sickness odds in the summer. Sometimes, Eweretta went to New York and took orders for clothes. Harriott Kinloch Middleton, her sister and Isabella’s mom, once sent Eweretta $200 ($5,000 in today’s currency) to buy dresses and material of the best quality.

On Aug. 4, 1839, Emma Middleton Huger Izard, Isabella’s older cousin, complained to Eweretta that every meal at her lodgings was “taken to the tune of chicken, chicken, chicken. Should I return to you next fall in the shape of a chicken pie, you must not be astounded, but in charity have me enclosed in a Roumillat crust.” (Roumillat was a kind of cheese, yet I have not found a recipe.)

Emma noted that she was staying at a house a half-mile from the Old Inn. I can’t figure out where that was. It was after her cousin’s husband, Frederick Rutledge, had sold his place to Charles Edmonston, who built Brooklands, and before her younger brother, Arthur Huger, had married Margaret King and moved into Greenlawn, which the bride’s father Judge King, had built for them.

(Greenlawn became Tall Trees and now survives as Kenmure, an events venue within a gated community.)

In the same letter, Emma reported that “Henrietta Rutledge came down to Mrs. King’s a day or two ago and made us a visit.” Henrietta had been pale, and was coughing blood, and Mrs. Baring had brought her back to health. (Henrietta would die three years later.)

Emma had gone on to enjoin Eweretta to come to Flat Rock and bring wine, a pillow and camphor on her journey. The camphor was for bed bugs at local hostels. One innkeeper, Emma said, had insisted to a traveler there was not a single bedbug in her place, and the traveler replied, “No, m’am, they are all married and have very large families.”

The Flat Rock idyll supported a society that put business out of mind — the men took care of that elsewhere — and created an American version of English country estate living.

Women flowered in girlhood, married people of their class, and sometimes their family, and went along with tradition, with some exceptions. Louisa Cheves, unlike her older sister, Sophia, resisted marriage until she was 30, and wrote books, Leigh Fought recounts in “Southern Womanhood and Slavery: A Biography of Louisa S. McCord, 1810-1879.”

When Louisa’s Shakespearean play, “Caius Gracchus,” was called a “closet drama” by one critic, she responded: “What else can a woman write? The world of action must to her be almost entirely a closed book.”

The great legacy of Flat Rock’s Golden Age, as its pre-Civil War years are called, is its architecture and landscape, which qualifies as a world-class, as well as regional survival.

There are a few ways in which such tangible historic environments are preserved. They become museums or historic homes, charging fees. Or they become parks and monuments, staffed and funded by governments. Or, as with The Flat Rock Historic District, they remain with private owners, who depend upon some protection from the political districts within which they’re located.

Many of Flat Rock’s historic buildings and sites are open to the public as hotels, restaurants and venues; as parks or public buildings; and as stops on occasional home tours.

This article was curated from the Citizen Times article by Rob Neufeld.
https://www.citizen-times.com/story/news/local/2018/04/01/visiting-our-past-flat-rocks-antebellum-golden-age/470856002/

Rob Neufeld writes the weekly “Visiting Our Past” column for the Citizen-Times. He is the author of books on history and literature and manages the WNC book and heritage website The Read on WNC. Follow him on Twitter @WNC_chronicler; contact him at RNeufeld@charter.net or 828-505-1973.