Visiting Our Past: Traveling back in time on a Flat Rock Road by Rob Neufeld 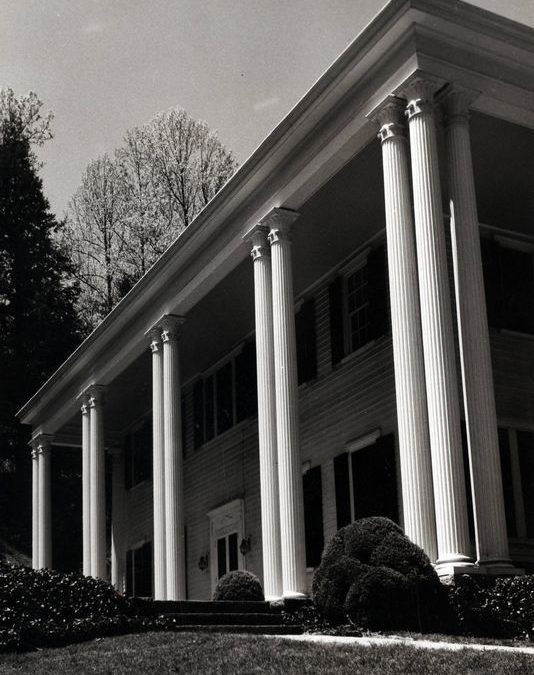 If you walk the one mile length of North Highland Lake Road in Flat Rock, you step nearly 200 years into the past.

At the east end, the 21st century reigns.  Fronting six-lane Spartanburg Highway, a super-Ingles sits above a bog; and a CVS store faces an Octopus Garden smoke shop, a chiropractor, a cell phone provider, and a six-lane path to I-26 a mile away in the opposite direction.

Neither Ingles nor CVS has the big fold-out road map of Henderson County that had been available 20 years ago.  If the Internet ever breaks down, people will be asking old-timers, “Where does this road go?” begging the laconic answer, “It doesn’t go anywhere, it just stays put.”

An NCDOT plan to turn North Highland Lake Road (State Route 1783) into a “complete street” has been upgraded from a low-priority project to an immediate one at the request of the Flat Rock village council, which seeks bike paths and sidewalks.  The “complete street” policy requires that any such state highway improvement also include road widening, curve straightening and easements.

North Highland Lake Road forms part of the boundary of one of the largest and most authentic national historic districts in the east.  It’s where the Charleston elite had established an extensive community before the Civil War, and where subsequent owners up to the present day have preserved most of the homes.

The proposed road-widening, Flat Rock’s Cultural Landscape Group states on its website, clgflatrock.org, would take down hundreds of trees, eat into the steep road banks of historic properties, destroy landmarks, cause drainage problems, and create a speedway between Spartanburg Highway and Greenville Highway, the path to historic Flat Rock village and Connemara.

Many residents, the Cultural Landscape Group adds, “are concerned that widening N. Highland Lake Road is the first step in resurrecting an earlier plan to create a southern loop for the county,” connecting to Kanuga Road to “make a thoroughfare-bypass around Hendersonville.”

History is in the making as you read.  On Friday, April 13, at 10 a.m., there will be a special Flat Rock village council meeting at St John in the Wilderness Church regarding the NCDOT North Highland Lake Road project.  The council has the power to vote down the project.

The North Highland Lake Road landscape changes radically one-quarter mile from Ingles as you cross the mostly unused railroad that had connected Spartanburg to Asheville via the notoriously steep Saluda Grade in 1885.

It is at this point where, today, you begin to see “Don’t Urbanize Flat Rock” signs on lawns and driveways.

To the right, grassland flats graced by ponds and King Creek form the Park at Flat Rock, established in 2013 on the site of a golf course realized in 1910 by Joseph Holt for his new Highland Lake Club.

“Yes, mam, an eighteen hole golf course,” the “French Broad Hustler” of Hendersonville boasted at the time, “something that Charlotte and Spartanburg and Asheville dream of at night.”

The project had become possible because of the development of technology that could dredge and drain the mountain bogs that had been — and still are to a fractional extent — a unique feature of the East Flat Rock area.

The ridge above the bog, on which Charlestonians had built homes, had once been a Cherokee trail, significant because of its relation to a celebrated Cherokee meeting place, the flat rock — an exposed granite outcrop now visible at and across from Flat Rock Playhouse.  An extension of it, near the Carl Sandburg Home, had been a place where Sandburg had escaped from distractions.

“When the day was mild enough,” Paula Steichen, Sandburg’s granddaughter, wrote in “My Connemara,” “Buppong (her pet name for him) often took his mail and reading to the porch, or the lawn, or to the great granite rock on the rise by the back of the house.”  He wrote poetry there.

Early settlers had also found Flat Rock’s climate and scenery stress-relieving, but it hadn’t been until the construction of the Buncombe Turnpike and its South Carolina part, the Saluda Gap Road, that Charleston’s rice planters had sought it out as an escape from discomfort and disease as well as distraction.

“As the great rice empire of the south shifted from water reserves (reservoirs) to tidal irrigation, malaria increased and planters sought the antidote of a salubrious climate in the Blue Ridge Mountains,” Susan Lowndes Allston wrote in “Early Sketch of St. John in the Wilderness and Flat Rock, North Carolina.”

The booming rice industry helped make Charleston an international mecca, and brought many Africans to America as slaves.  European countries had ambassadors in Charleston, and some of them made it to Flat Rock and built homes.

Since the Cherokee path had followed the ridge from the flat rock and probably went east then north along Mud Creek (the route of present-day I-26), it’s likely that Cherokees on summer vacation had often walked or ridden present-day North Highland Lake Road.

“Now, along this road” in 1827, Allston recounted, “came two Carolina rice planters, Charles Baring and Daniel Blake, and with them Alexander Robertson, a rice factor.”  Baring, son of a major London banker, had become a rice planter in Charleston after having married Susan Heyward, the land-rich, celebrity queen widow of rice-planter James Heyward.

The Barings built Mountain Lodge, a large white Colonial mansion with towering Greek columns around a portico.  On their acreage, they established “a porter’s lodge at the entrance gate, a private chapel and a rectory some quarter of a mile from the main dwelling, and a private park for deer hunting,” Blanche Marsh noted in her 1961 book, “Historic Flat Rock: Where the Old South Lingers,” with photos by Kenneth Frederick Marsh, whose collection is held by University of South Carolina and posted online.

The arrival of the Barings in Flat Rock began a migration that fostered a summer colony of Charlestonians and created a landscape of estates and roads that marks it today as a rare archaeological survival.

Except that it’s more than archaeological.  The Flat Rock-Charleston kinship continues today; and Flat Rock society serves as stewards of architecture, landscape and a bucolic country style.

Charles Baring had established the Flat Rock way when he’d bought thousands of acres of land and sold tracts to newcomers, joined in 1830 by South Carolina judge Mitchell King, who’d made similar investments.

Argyle is currently being maintained by the King family, which has been in continuous ownership of the place since 1830.

Mountain Lodge, threatened by ruin at one time, was purchased in 2014 by Historic Flat Rock Inc. and resold to Julien and Lori Smythe.  Julien is the great-great-nephew of Ellison Adger Smyth, second owner of Connemara.

Book after book about Flat Rock celebrates Charles Baring’s wife, Susan, of whom her previous husband’s family had been suspicious.  A brother-in-law, Nathaniel Heyward, had tried to invalidate Susan’s marriage and thus her life interest in three Heyward plantations on the Combahee River below Edisto, Robert B. Cuthbert related in his book, “Flat Rock of the Old Time.”

All that had come to light in Nathaniel’s investigation of Susan is that “before her marriage to James, she had apparently been mistress of five other men … Moreover, she came from a poor class of tradespeople, her father having been a butcher.”

Susan proved a valuable and loyal partner to Charles Baring.  Her command of her society — at Mountain Lodge parties and at St. John in the Wilderness — went along with a flair that made people defer to her magnificence.

“She was a woman of dominating personality who had passed middle life when she first came to Flat Rock,” Sadie Smathers Patton related in her 1961 book, “A Condensed History of Flat Rock.”  “She was recognized as a skilled writer of dramatic works, and had some accomplishments as an amateur actress.”

When the Barings “carriage reached the church door,” Patton said in her 1947 “The Story of Henderson County,” “a footman would step down and wait until Mrs. Baring laid her Prayer Book on the pillow which he held ready for its reception.”  Another attendant notified the rector that the service could soon start.

Susan died in 1845.  Charles remarried and built Solitude on land that is now occupied by Highland Lake Inn and the Rhett Mill Dam on N. Highland Lake Road.  The current DOT plan threatens the roadside of the historic property, including pillars, stone walls, driveways, plantings and access roads.

Next week, the Highland Lake part of this column’s Historic Flat Rock tour continues, with stories about the Barings, Trenholms, Rhetts, their households, and current residents.

This article was curated from the Citizen Times article by Rob Neufeld.
https://www.citizen-times.com/story/news/local/2018/03/25/visiting-our-past-traveling-back-time-flat-rock-road/451072002/

Rob Neufeld writes the weekly “Visiting Our Past” column for the Citizen-Times. He is the author of books on history and literature and manages the WNC book and heritage website The Read on WNC. Follow him on Twitter @WNC_chronicler; contact him at RNeufeld@charter.net or 828-505-1973.